On our last day in Greybull, Wyoming, we set out to explore a 24 mile trail that connects Greybull and Hyattville. 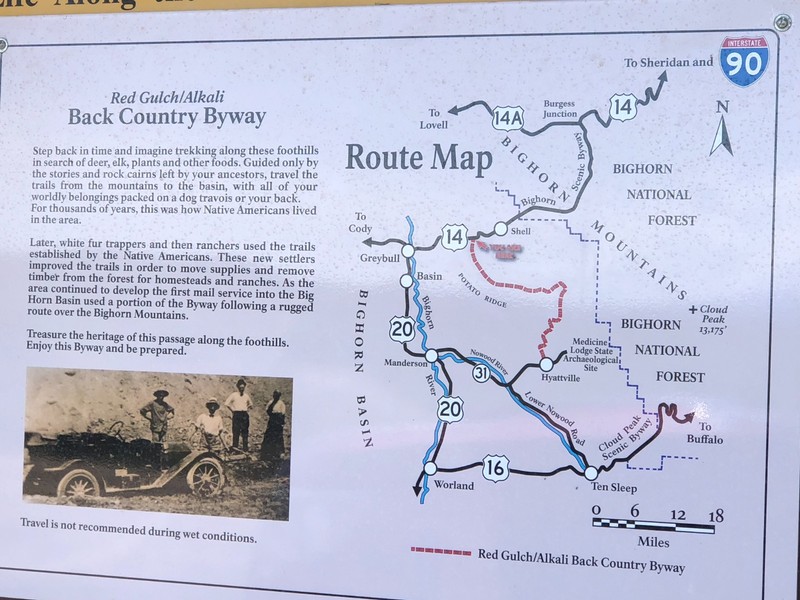 Everyone we talked to said it was a great tip but NOT to do it if it was wet. They are really serious about this because the soil here turns to mud that sticks to your tires until they are so caked they won't turn in the wheel well anymore and you're stuck! 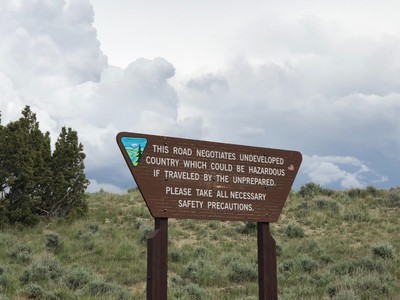 Lucky for us, it was bone dry except up on a detour we did up towards the National forest where there was still snow. We turned around here as it just got worse and worse up the road. 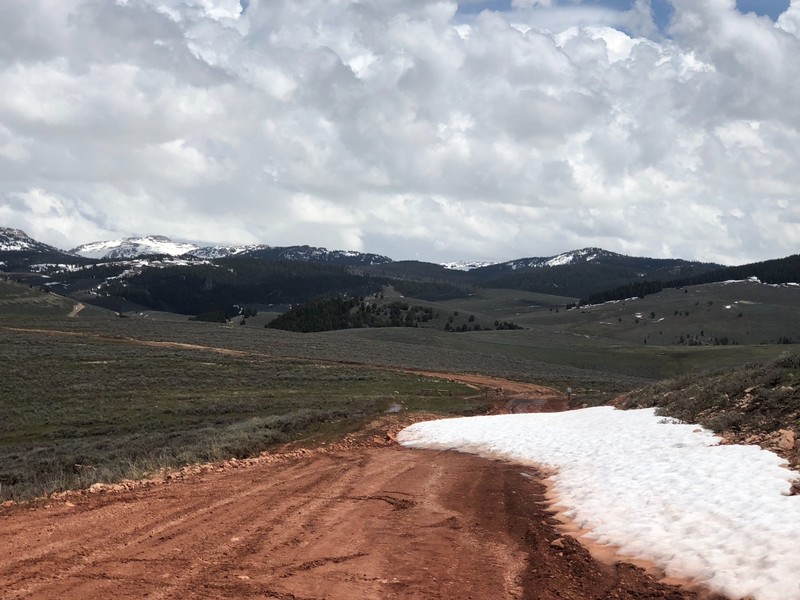 The first stop on the drive was at the Red Gulch Dinosaur Tracksite where there are tracks preserved in the rock. 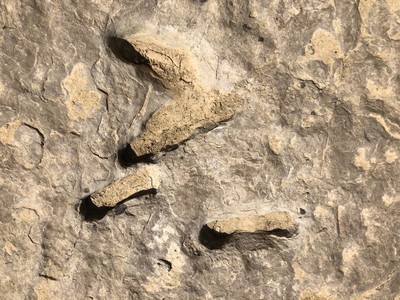 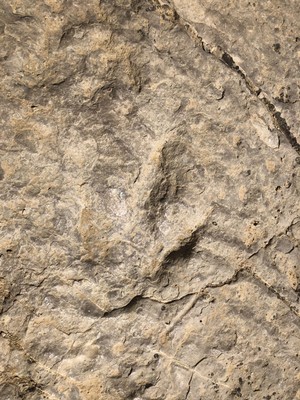 Just past here, we met two retired Forest Service archaeologists having lunch on their tailgate next to the road. They would be one of three cars we saw during this entire day. For a look at how small and alone we were in the vastness, check this out.

But out across the open basin we went. The land rose and fell, buttes and cliffs came and went in every shade of earth from white to red, and the spring moisture laid a carpet of green anywhere it could. 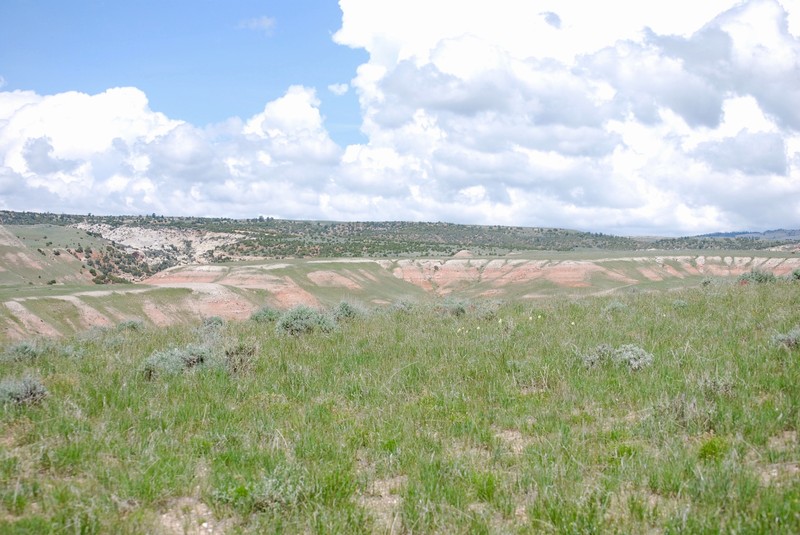 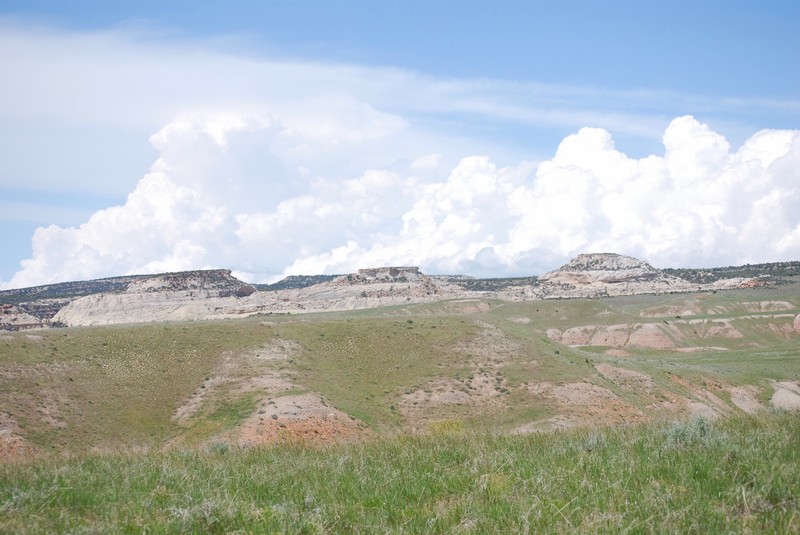 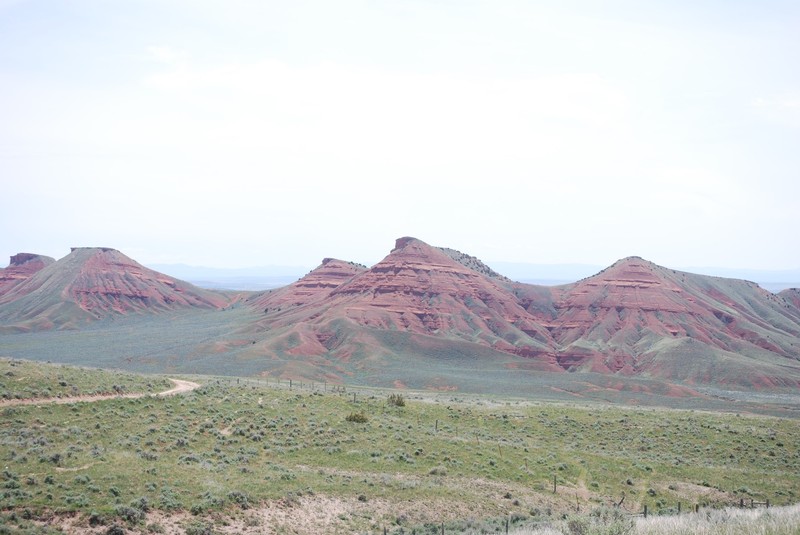 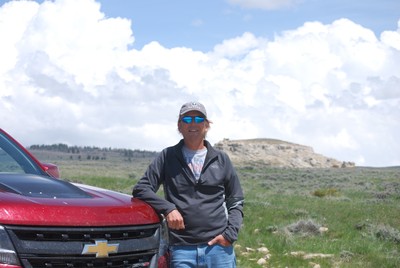 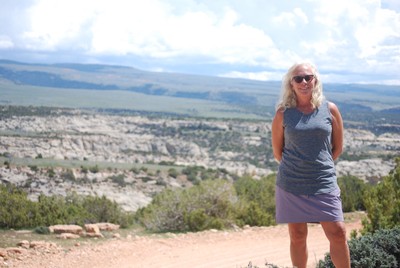 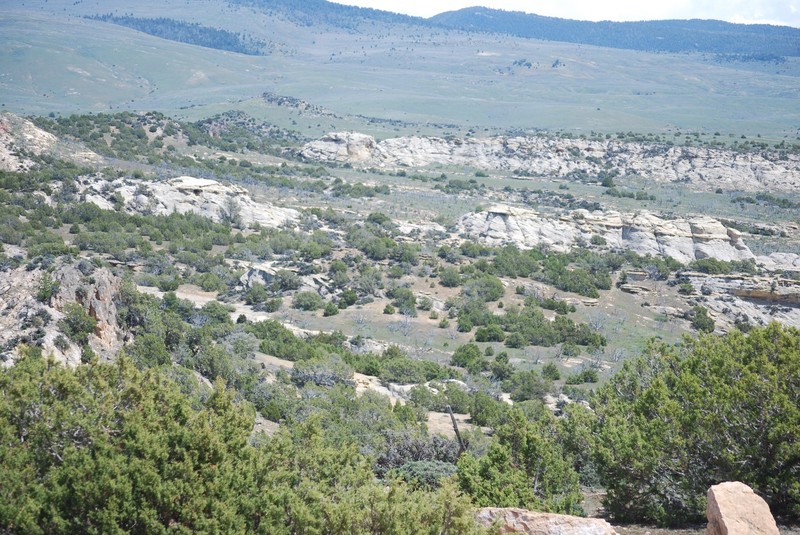 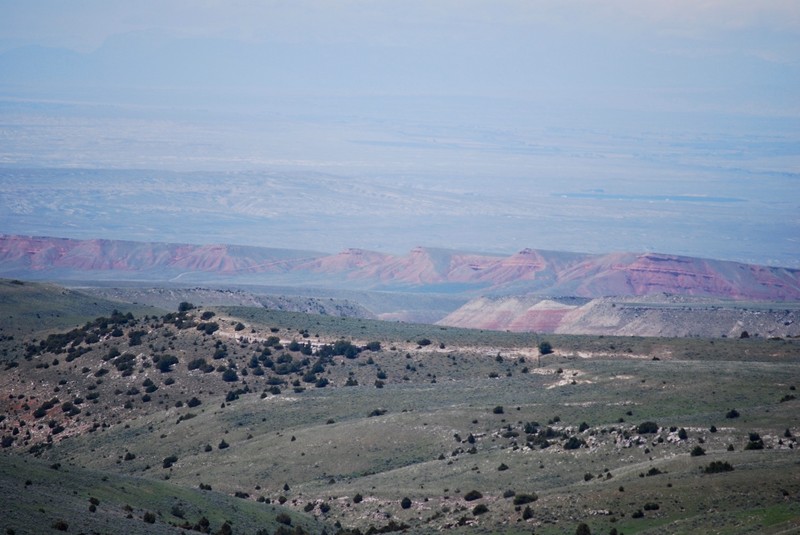 Cadeau is awesome on these trips. She just sleeps through most of it. Our only worry is keeping her close when she does get out so as to avoid snakes and scorpions! 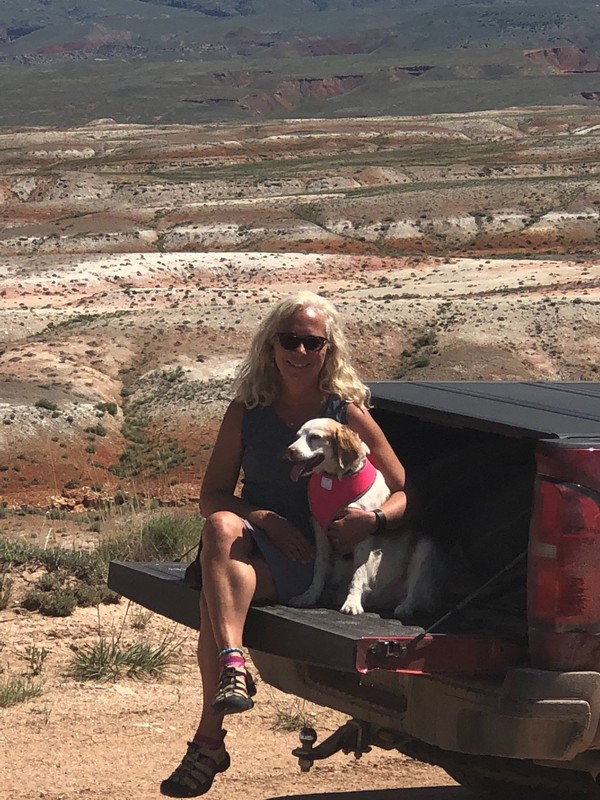 And cairns did in fact guide the way in many places. 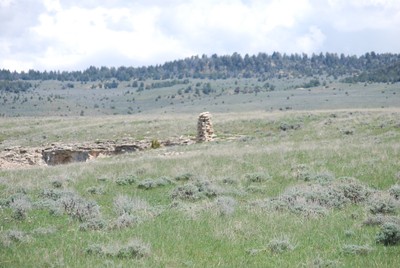 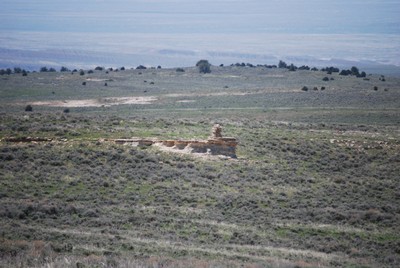 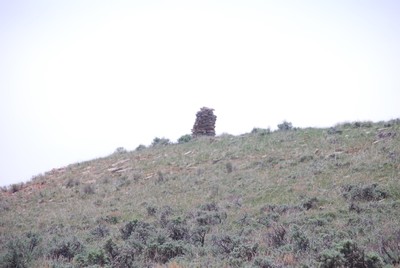 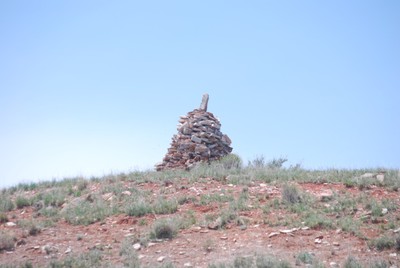 What would a post of mine be without an acknowledgement that there were wildflowers; the treat were these dark blue Larkspur. 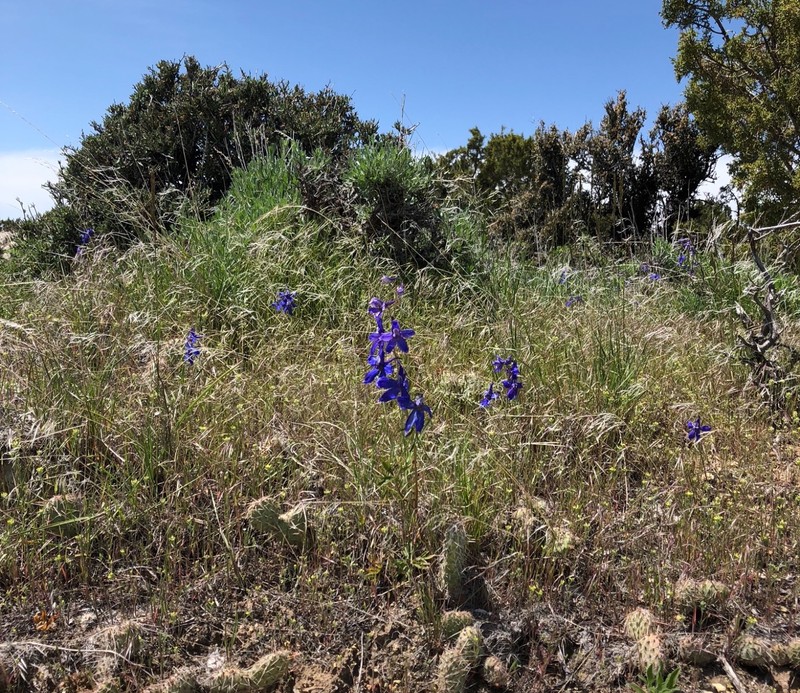 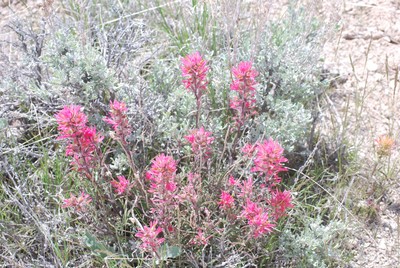 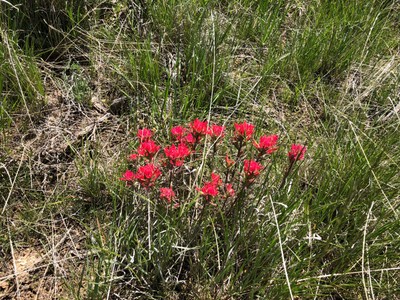 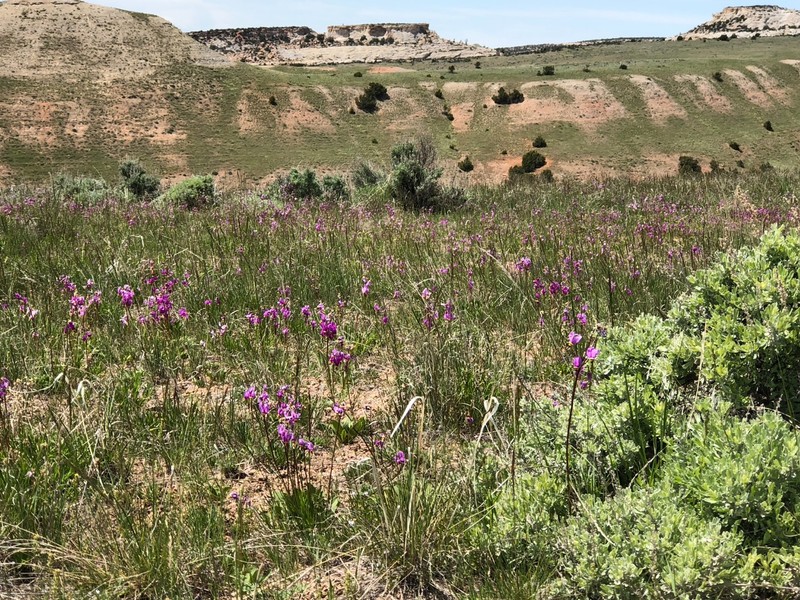 The world out there is like one giant rock garden. Each time we got out of the car, we realized we were surrounded by blooming plants, some so small you could barely see them until you really stooped to look.

Saving the Best for Last
The highlight of the trip though was when we looked off into the distance and saw these caves - and that there was a road up to them! 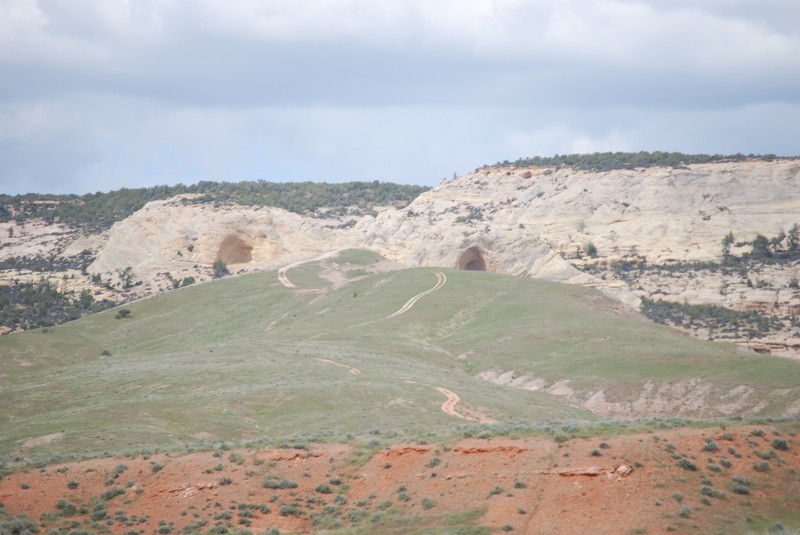 Check out this video to share what we experienced. Forgive the herky-jerky, the GoPro died so I filmed with the iPhone.

Previous Next Table of contents

Comments on this blog entry are now closed to non-Travellerspoint members. You can still leave a comment if you are a member of Travellerspoint.

If you aren't a member of Travellerspoint yet, you can join for free.